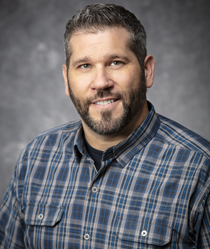 A high achiever and goal directed individual, his journey from being an apprentice electrician to area manager is nothing short of remarkable. David started his career as an apprentice electrician in 1994-1996 (IBEW), a path that was briefly interrupted by service in the U.S. Army between 1996 and 2001. Following an honorable discharge as a noncommissioned officer at Fort Carson, Colorado, David restarted his electrical career by attending classes at Associated Builders & Contractors (ABC). He graduated at the top of his class in 2005, then served as a Journeyman and Foreman electrician for two years.

David joined Rex Moore in 2008 first as a Project Engineer, then in 2010 was promoted to Project Manager. He accumulated extensive field experience in all aspects of electrical, telecommunications, security and fire alarm installations. David has managed various multiple large scale electrical projects up to $25 million in size, including renewable energy (Patua Geothermal), industrial food/milk processing, hospitals, multi-family residential, and mixed use and hospitality projects.

Always true to his roots, David enjoys serving on the ABC Trust Committee and giving back to the organization that made such a large impact on his career. When not advancing the electrical profession, he especially enjoys spending time with family and friends. His favorite outdoor activities include hunting, hiking and camping.